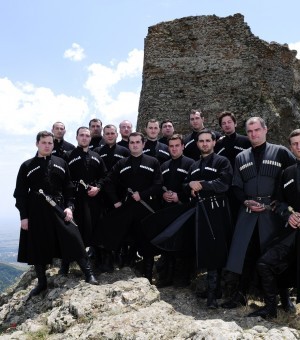 "Ensemble Basiani surprises with a psychedelic groove of harmonies"

Connecting the simple points of Ensemble Basiani’s origins in the former Soviet state and now independent country of Georgia in the Caucasus region of Eurasia, logically we could expect the influences of both the Orthodox Christian church and Islam in their traditional folk music. However, that superficial concept was blown out of the water as this troupe of 12 men with strong voices and amazing lung capacity launched into a near psychedelic groove of unusual harmonies, rhythmic intensity and sheer beauty.

Singing without accompaniment, with the exception of either the panduri or chonguri, both long-necked lutes of ancient Greek origin, Ensemble Basiani flawlessly illustrated the diversity of the rich polyphonic vocal tradition of Georgia. In fact, scholars now propose that true polyphony, the weaving of many voices or melodic lines, was first sung in this region before spreading across Europe.

Not everything was polyphonic here. In fact, mixed in with the rousing work songs, circle dances and table songs were a handful of peaceful and sumptuously simple religious texts in which we could hear the chant influences, long phrased drones and slow harmonic shifts under sweet lyrical solo voices. Singing so softly that we collectively leaned forward in our seats, the harmonies slid into quite unusual territory for our Western ears. Traditional Georgian music is not based on the European equally tempered 12-tone system and instead sounds compressed or slightly spicy at times.

In these more lyrical works and the ritual song, “Chona,” there was also evidence of the Asian vocal ornamentation style that is more commonly heard in Arabic music or in the call of the Muezzin to prayer.

The ebullient music for work, dance and the table was what captured the heart of the audience at this performance. The work song “Elesa’s” call and response structure would not be surprising to hear from a crew of wood cutters, but here we heard our first example of krimanchuli, or simply put, yodeling. This always-fascinating vocal trick was so vigorous in the circle dance “Didebata,” mixed with clapping hands, it was hard not to dance along with it.

“Naduri Shemokmedura,” a four part antiphonal work song from western Georgia, featured dueling krimanchuli making a rousing finale. However, what was called “the crown of Georgian folk songs” preceded the final yodeling. The table song “Chakrulo,” which means “intertwined,” is considered the finest example fearlessly modulating vocal polyphony. What made this performance memorable for me was knowing that this specific song is included among the select list of musical examples on the Voyager spacecrafts golden record to represent the life and culture on earth. It was an honor to enjoy these gentlemen with their amazing voices and music in a live performance.